So we bit the bullet and entered a Kennel Club Show. I consider this our first KC show, as although we did Adams in January it was inside without weaves, and we weren’t ready for it. So I’ve learnt from it and removed it from my memory. As you know we’ve been struggling with our weaves and they’re still not flawless but he’s getting them fairly well in training. 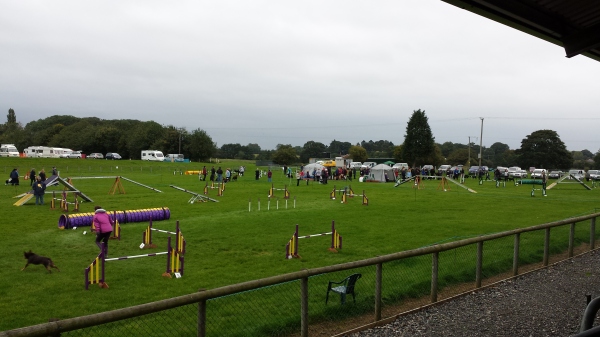 Combined G1-3 was a nice course by Mike Walker and there was an early serpentine (ish) of a tunnel jump jump. I opted to go for the trickier front cross on this side of the jump rather than clinging to the tunnel exit and it went like a dream! Watching briefly, not many other people seemed to do that and it put me in a much better position for the rest of the course. Guinness freaked a little on the seesaw and then hesitated up the dog walk. First time he’s has been on aluminium since January but he was fine in following runs so I think he got used to them after that first go. He ran straight past the weaves twice, third attempt got the entry and forth time managed 10 poles. Never mind. He was very slow and sluggish and it didn’t feel like a good run. Afterwards he went and had a poo and it isn’t unusual for our first runs to be rubbish if he hasn’t had a poo! I might not feed him any breakfast on show days in future.

G1-2 Jumping was a mixed bag. We missed the weaves first time but got them lovely second attempt. Only 6 poles in this course. He didn’t run ahead very well which didn’t leave me in the ideal position for rear crossing the tunnel. A few poles down so I slacked off a bit and he missed an off set jump. However I got Guinness tugging lovely away from the queue and then we joined the queue still tugging which is brilliant! As soon as I stopped tugging he wouldn’t recommence.

G1-2 Agility, final run of the day went well. Our contacts were good although I can see that he self released, even though I got the command in he went before I said it and I’m giving the command before he’s in a 2on2off! Naughty girl. We got 12 weaves on the 4th attempt and two of the re-tries weren’t good due to my positioning.

Grade 1-2 Agility, Lou’s course, was first. We have a storming run which I think (think?!) we would have won had we got our weaves. I ran fast, Guinness ran fast, we got a nice tight front cross in and good rear cross. Guinness saw a wall for the first time and cleared it without a hitch. (I didn’t watch him as I was too busy running fast ahead). Attacking the course really didn’t help our chance in the weaves and he ran past twice and then only completed 9 poles on our third attempt. Gutted. But I was impressed with our run and I was happily puffing a bit at the end. It’s about time I started running! I gave Guinness much less breakfast this morning and he ran well despite not having a poo. He didn’t go until lunchtime so I think that helped a lot.

Combined G1-4 Agility was one of those runs where everything went wrong. He didn’t wait and ran past jump one and stood barking at me. Luckily it didn’t take too much to get him back but it’s been a while since he did that so I’m a little bothered by it. We did a good front cross at the start but then everything went to pot. His contacts weren’t great and I tried to hold them but he came off, he hit the top bar of a spread and I didn’t attack the course so he didn’t run with feeling either. We’ll forget about that one me thinks. 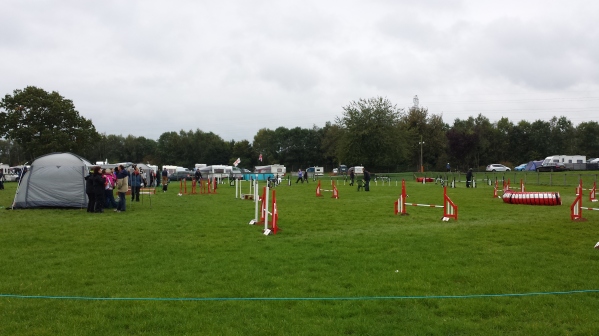 Combined G1-4 Jumping was a tricky handling course that had a lot of people grumbling. It was also a big class and walking it was a little like being in a mosh pit. The busiest course walking I’ve been in by far. There were lots of different options to take and I thought a lot about what was best for us and the course. Ignoring the weaves, it ran like a dream! My decisions worked really well and both front crosses and rear crosses were good. I think those type of decision-making moments are what separates okay handlers from good handlers, and maybe even handlers from instructors. (If you make the right decision that is). As well as my training at Dig It the sessions I’ve done with Bob Sharpe and Katie Long have really helped me to get to that stage. As for the weaves, he got the entry first time and did 10.. but then popped out. Improvement?? Maybe.

Finally Grade 1-3 Jumping was a bit messy. G1-4 Jumping was one of those courses that looked hard but ran well, whereas G1-3 looked okay but ran quite hard. We happened to wonder over just as they were restarting after lunch so had the second run with no queue. I would always choose no queue over queue, but I hadn’t revved Guinness up much and he broke his wait and ran off barking again. I got him back and we set off okay. Weaves we got on the second attempt but popped out after 10, and the rest was okay but not as smooth as I’d like.

9 out of 9 eliminations for us this weekend. All on weaves.

I’ve switched between doubting if we are competition ready and thinking that we just need more show experience. In training our weaves are pretty good but we do have slip ups. There’s only so much you can do in training and I think it is time we got to more shows. This is our second time away from Dig It and we definitely act differently at our home competitions.

Plan! We’ve entered Wilmslow KC Show which is indoors and then that will be it until next season. We’ve progressed to Intermediate at Dig It now so we’ll get weaves and seesaw in our runs, and I think doing beginner up until now hasn’t helped us to nail our weaves . Over Winter we’ll get our weaves sorted using the Dig It Winter Series as well as pushing our start lines and our contacts. I think I’ll try to get to other unaffiliated shows as well, such as Agilidogz, for some different atmospheres. Then for 2014 we’ll get out there and crack it!

I had an amazing time this weekend and was surprised to see so many people who I knew and recognised. It was lovely to meet up with friends and the show felt very well organised and run. It also didn’t feel busy, despite there being some large classes and 6 rings, it all felt calm and spacious. You were also never that far away from places and parking was close to the rings.

Something that I noticed was that people didn’t seem to help very much and I watched several judges changing their courses all alone while the ring party had gone off to have a break. Perhaps it is just the Dig It Shows where we aren’t shy about yelling out for people to come and get stuck in helping.