My first half marathon – The Potters Arf

I can’t believe it! I have to remind myself of where I have come from, this time last year I found 6.5km to be a difficult long run, and this time 2 years ago I couldn’t even run a mile.

It’s taken a lot of hard work and persistence to reach this point and I’ve been following a specific half marathon training plan for the last 16 weeks, with some missed runs and set backs, as is normal for everyone’s training plan I’m sure.

The Potters Arf is a local half marathon and one that Ash’s brother has run for the last few years, so it seems like the right one to do first… even though it is renown for being hilly!

We set off and quite quickly we were going up hill then down hill, through the town… the atmosphere was amazing.

We left the town centre and were keeping up with the 2:30 pacer, although we knew we were likely to loose him as we were expecting to finish about 2:40.

As we reached the next main town there were people with a car wash business spraying their pressure washer in to the air for the runners as they passed. It was quite a hot day so I welcomed the refreshing spray.

Despite the roads still being closed there were cars joining from the side streets and they were driving dangerous close the runners, some of who were rightly refusing to move to the side.

As we reached around 3/4 miles the sweeper car came past us and asked us to move on to the pavement. I was a little surprised as at the pace we were going we would have finished in around 2:35, and the cut off time was 2:40, however I wasn’t phased and was far too busy having a good time.

Along the pavement we ran and the support continued. People sat in their front gardens, offered jelly babies and children high-fived us. Local running clubs had cheering stations along the route. The best sign I saw was “If Donald Trump can run a country then you can run a half marathon”.

Before we knew it we had been going for an hour. On wards we plodded, at a 3:1 run:walk ratio, except for the big hills that definitely needed walking up.

At about 8 miles I started to flag. It became harder to put one foot in front of the other and it took more effort to run when the run section came. It was pretty hot and one of the marshals told me that it was tricky conditions today. But I knew we just needed to keep going. Keep plodding on.

I felt quite thirsty and my tailwind was leaving me with a slightly sticky mouth feeling, so I reluctantly grabbed a bottle of water at the next aid station and took grateful sips and wet my neck and chest.

At about 11 miles I heard and then saw some of my family cheering us along. It was so good to see them. Then a little further up there were two of my friends! I rushed forward to hug them and then on wards we went.

We reached the legendary heartbreak hill and boy was it steep! Short but steep. I just tried to keep one leg moving in front of the other. Everyone around us was walking.

As we reached the top and caught our breath we continued on. Nearly there! We started to pass runners who had finished, sporting their t-shirts and medals proudly. They gave us words of encouragement as we passed.

Soon enough we were heading back in to town and for the finish line. Everyone was cheering and then we were there! We had done it.

As I glanced at my watch it was on 13.05 miles… I couldn’t leave it there. This was my first ever half marathon! A lady handed me my medal then a gentleman gave me a medium t-shirt, apologising that they had ran out of small size. All I could think about was getting that other 0.05 mile! It may be silly but I just couldn’t face that the “Half Marathon” slot would remain empty on my garmin.

I rushed off down the road and then I was done! 13.1 miles achieved!

I’d just ran a half marathon! A HALF MARATHON!

I felt amazing, and a little tired.

We went for a well earned drink and some greasy food then it was time to go home and chill out. I felt absolutely knacked, and a little run down surprisingly.

Looking back on the race I am immensely proud of what I achieved and had a great time, but there were a few aspects of the race that I was a little irked by. While I didn’t let it bother me during the event I wonder if I would enter the Potters Arf again.

However as I’m quite new to races I’m not sure if I’m being unreasonable and this is just something you have to accept about races and something I need to accept as a slower runner. I’d love to hear your thoughts.

Regardless, I’m so so proud and pleased to have done my first half marathon and I’m looking forward to the next.

I thought I’d finish by sharing the poem that is printed on the back of the finishers t-shirt:

A Runner’s True Love for their Potters… Honest!
The day has arrived and the nerves are steel,
lace up my trainers, watch is on – it’s all very surreal!
The countdown starts and the cheers begin,
The runners rush off… I wonder who will win?!
The crowd roars as we tackle the hills,
The ups and downs – it’s a race full of thrills!
Lichfield, Victoria, Anchor Road done.
We carry on determined – despite the baking sun.
The shouts and whoops from the family’s half-way round,
The ‘it’s all downhill from here’ comments start to resound!
But we know that there are few yet to complete…
Heartbreak Hill at Milton – but we WILL defeat!
The finish is near, the end is in sight,
I push on some more with all my might!
My legs ache a little, but the blisters are worse,
I feel emotional… but try not to curse!
But waiting there with their smiling faces…
a fantastic Stokie crowd do make it the BEST of races!
After 13.1 miles of running, a smile and tear,
I can safely say that we’re ALL winners here!
By Charlotte Smith, Potters Trotters 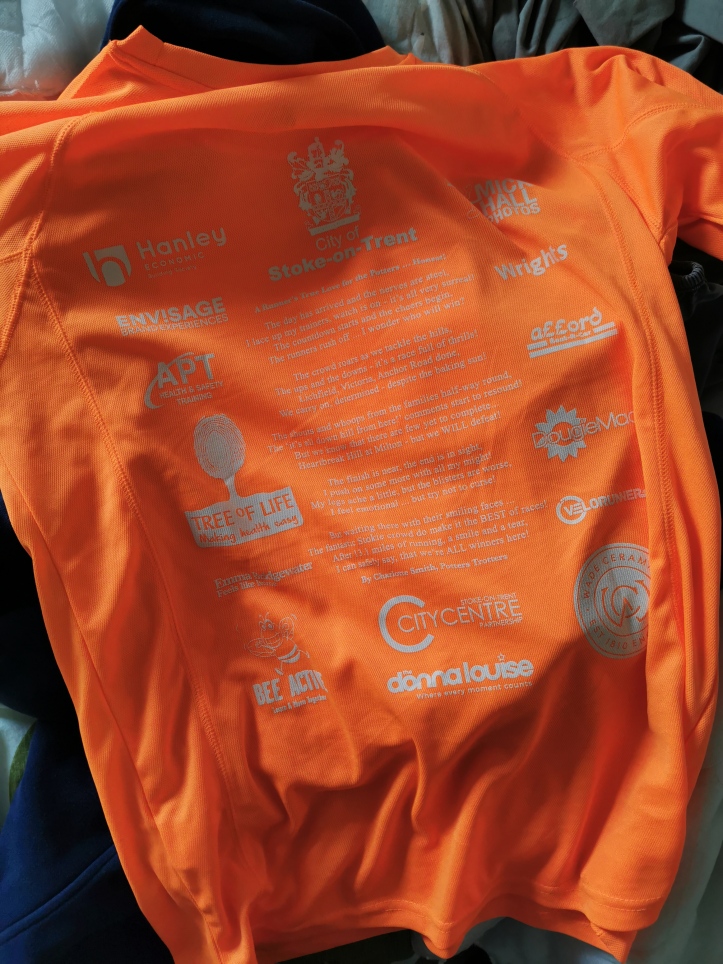