Two years after we conquered Scafell Pike the four of us set off for the weekend to tick off another peak from our wish list. I’m not any fitter than I was when I did Scafell, and actually due to recent illness I was perhaps in worse shape, so although I was feeling a little apprehensive about my ability to walk up Helvellyn and aware of the struggle it was going to be, I knew that I had experienced that struggle before up Scafell and pushed on and made it, so whatever Helvellyn threw at me I could overcome it.

We camped at Gillside Farm which was right at the start of our route. It’s a lovely campsite alongside a stream. Due to all of the recent rain it was very waterlogged but we managed to find a fairly dry, flat spot on the hilly site. The owners were very relaxed and were allowing cars to drive (or attempt to drive) across the boggy field. Unfortunately there were a very rowdy pair of lads next to us who seemed to be up all night shouting and drinking. Although you can choose your location you can’t choose the people who are there as well!

We were so lucky with the weather and set off on the Saturday morning with clear skies and a gentle warmth. Straight away I was feeling the struggle as we started the constant climb uphill, but I was positive and knew what I needed to do. A short stretch, then a short pause, then a short stretch, and a short pause. For me pushing hard and doing a big long section wouldn’t work as I’d exhaust myself and then take longer to recover. So instead I just took it slow and had little pauses to catch my breath and then slightly longer breaks at times. It’s worth pausing to look back a few times during this section as the views of Ullswater are stunning. 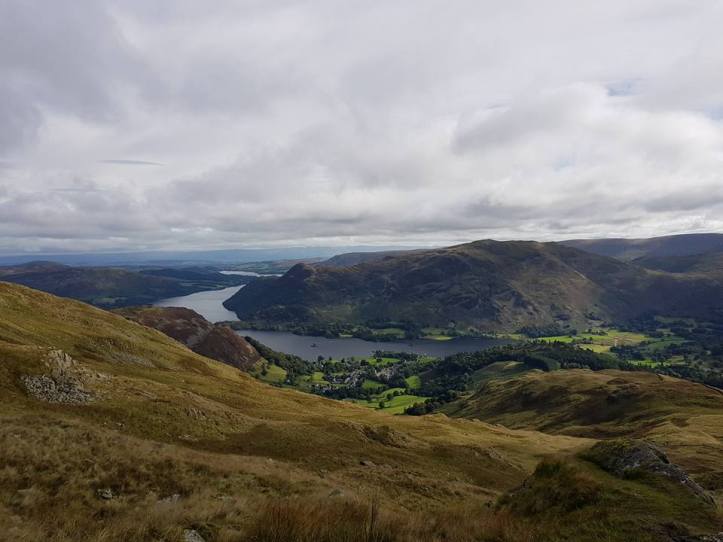 After about an hour and a half we could see the peak and most importantly we could see Striding Edge. Here we stopped for a longer snack break, before going for it!

We’d read a lot about the ridge and were really excited, as well as a little nervous, but nothing really prepares you for it. You just don’t know what it’s going to be like until you’re there!

It’s quite bizarre really, it’s a rocky ridge with plenty of room to walk along the top of the ridge, stepping carefully from rock to rock, and the sides gradually step down either side of you. So it’s not the sort of “balancing on the edge” or “10ft drop either side” feeling I was expecting. However it became easy to see that if you did take a little slip or a topple sideways you wouldn’t stop and it would mean a catastrophic injury, or worse. Unfortunately several people have lost their lives already this year on Striding Edge so it’s not something to be taken lightly.

I think the worst part about it is that the rocks are obviously jagged, and sometimes slippy or loose, so you have to be really careful about each step you take. I’m also very cautious coming down rocks so I opted to go on my bottom a few times (thankfully I was often behind people who were doing the same so I didn’t feel like the only one).

At one section there is a sheer wall that you need to climb down. I love climbing up things but I find climbing down really scary as you can’t see where you are putting your feet so you are clinging on with you hands lowering yourself down hoping your foot will find somewhere safe before your arms give up.

Naturally walking Striding Edge is slow progress, but a lot of fun and it gave me a real sense of adventure. In places there is a slightly lower, normal path, but we wanted to do Striding Edge properly.

Before long we were looking back at the ridge and walking along the level to the trig point. Hurrah!!

The views were fantastic. I love the Lake District. It is so beautiful to be completely surrounded by mountains. And being on the highest one in that range really makes its extra special.

We took a long, gentle winding route home which circled around the other side of Red Tarn and we were back and done after about 5 hours. 10 miles of walking in total. We followed this route up but took a slightly longer way back – http://www.trekkingbritain.com/helvellynviastridingedge.htm.

We opted for tea in the local pub The Travellers Rest which was is a lovely cosy pub. Be warned it is popular so book ahead or arrive before peak time not to miss out.

On the Sunday we had a relaxed morning, sleeping in then slowly packing up after a lovely breakfast purchased from the catering van on the campsite. Bacon and egg butties without needing to do any washing up, bonus!

We went home via Ambleside for some much needed outdoor retail therapy where I treated myself to a new hoody and some trail shoes.

What an amazing weekend. It has really re-kindled my love of mountain walking and straight away I was looking for the next one to do.