I can’t believe I’ve not written about the chickens yet! Our lovely 4 ladies have been here for 2 months now and have settled in well.

Ash and I have wanted chickens since we moved in and last summer we fenced off a small side of the garden specifically for the chickens, however due to Zebby arriving and then winter it was a while before we finally got them.

We umm’ed and arr’ed about which breeds to get or whether to get rescue hens and decided as we were new to keeping chickens and we weren’t sure how crazy Zebby was going to be that we would rehome some caged hens.

The British Hen Welfare Trust takes in thousands of battery/caged hens that are due to be slaughtered and find new homes for them. They provide a lot of advice to chicken owners and only ask for an optional donation fee of £5 per bird. We had to register our interest and how many we want and then after a short phone call we were given a date and time to collect our chickens in Ashbourne.

We were so excited! We arrived and there was this shed full of ugly, featherless, scared looking chickens. The poor things. We were given 4 and off we went home. They were an interesting mixture with 2 of them being very bald and 2 not looking so bad. They travelled well and we popped them straight in to the coop and left them for the night.

I’ve always thought that chickens should have old ladies names and we decided to name them after our 4 female grandparents; Ann, Joyce, Gwen & Geraldine.

We were told that we would probably need to place them in their coop at night and bring them out in the morning for the first few days, however straight away they were going in and out of their hut and took themselves off to bed the second night no problem.

On the 2nd day we had our first egg! Then another egg, however the shell was so flimsy Ash broke it in his hand. 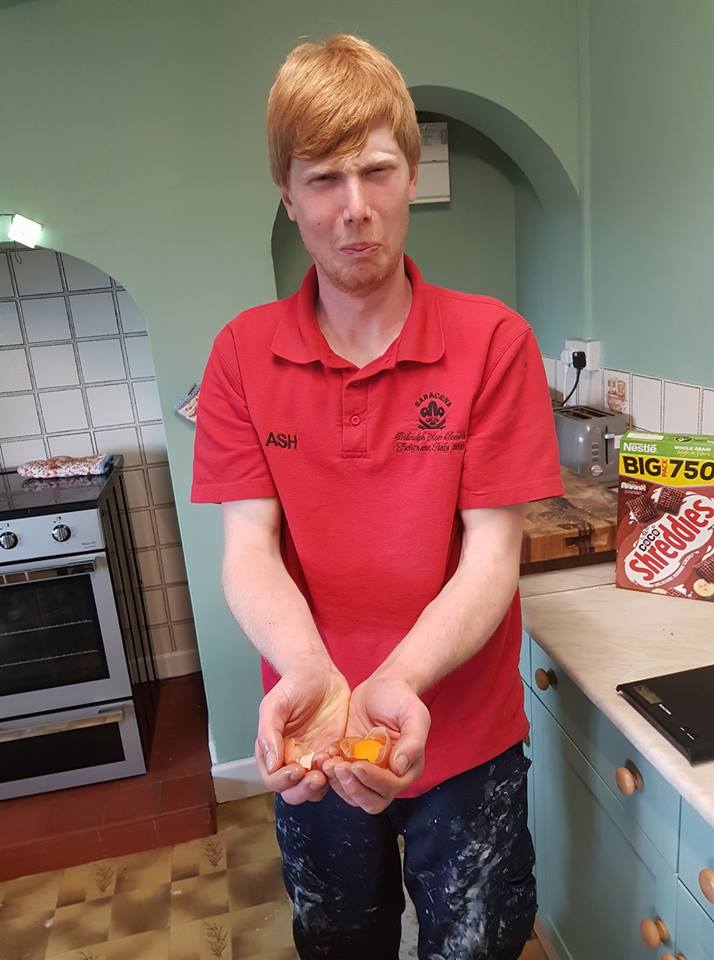 After a few days of laying they pretty much stopped and we would be lucky to get an egg a day, however something better happened, they started to grow their feathers back!

We’ve watched the smallest, shyest chicken Geraldine transform from a bald, weedy chicken to a beautiful chicken with a full, thick red plume. The only thing she is still missing are her tail feathers, but  I’m amazing at home much the chickens have changed in just 7 weeks. 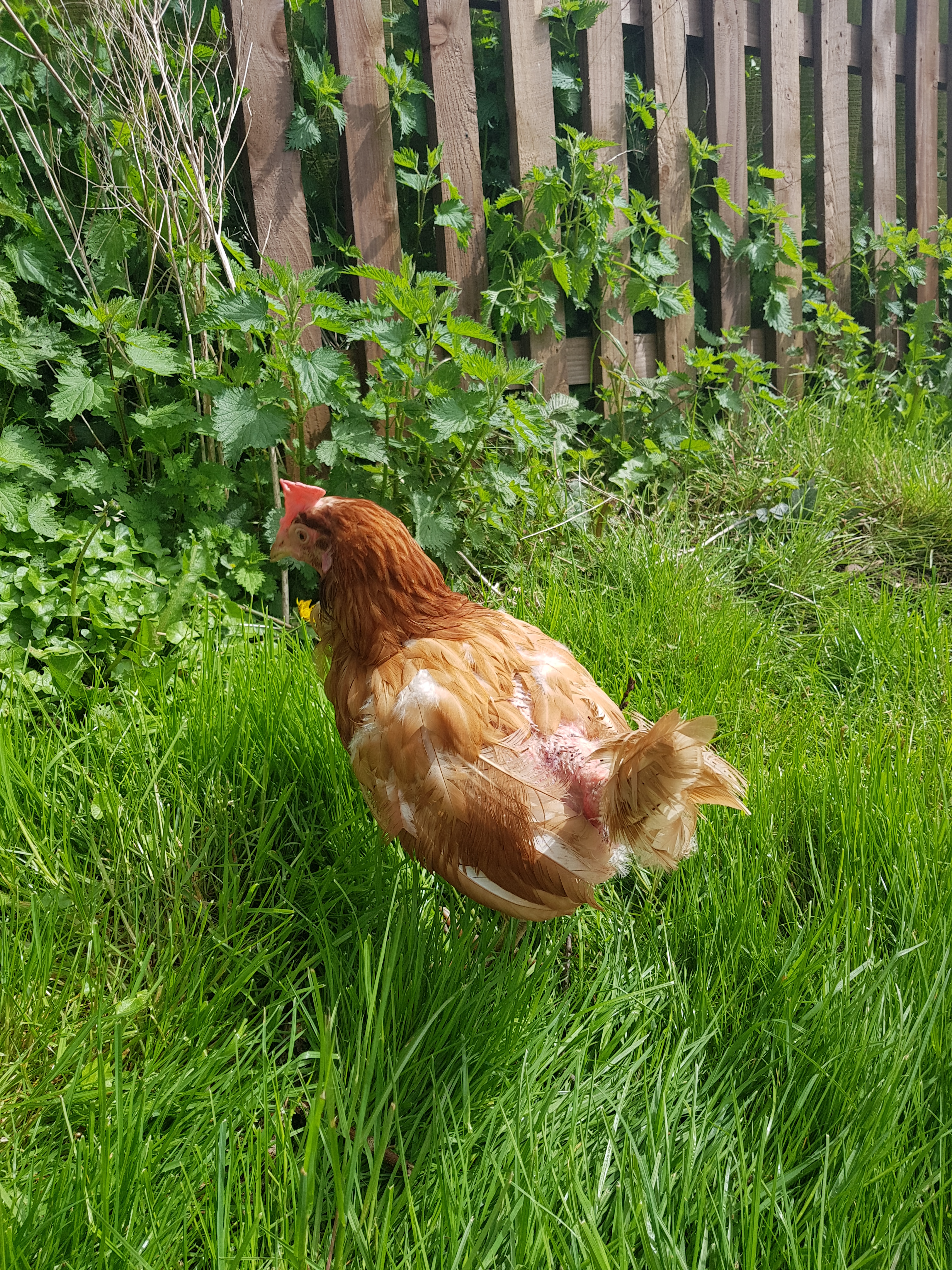 They now come running to the gate whenever we approach and happily eat out of your hands and jump over your legs if you sit with them. They spend their days scratching and pecking around or lying under the cover of the tree.

We get 3 eggs a day now and having them has really improved my diet, plus it makes me proud to know exactly where the eggs have come from. 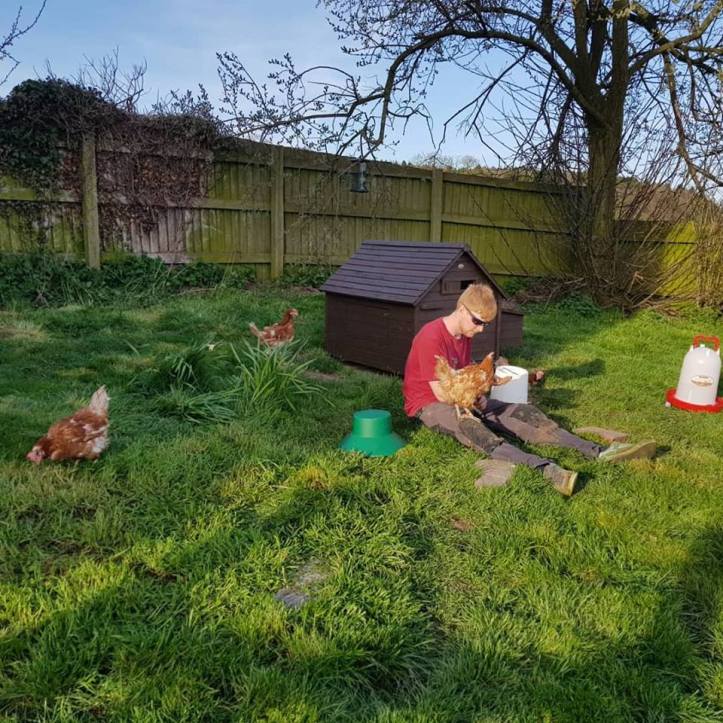 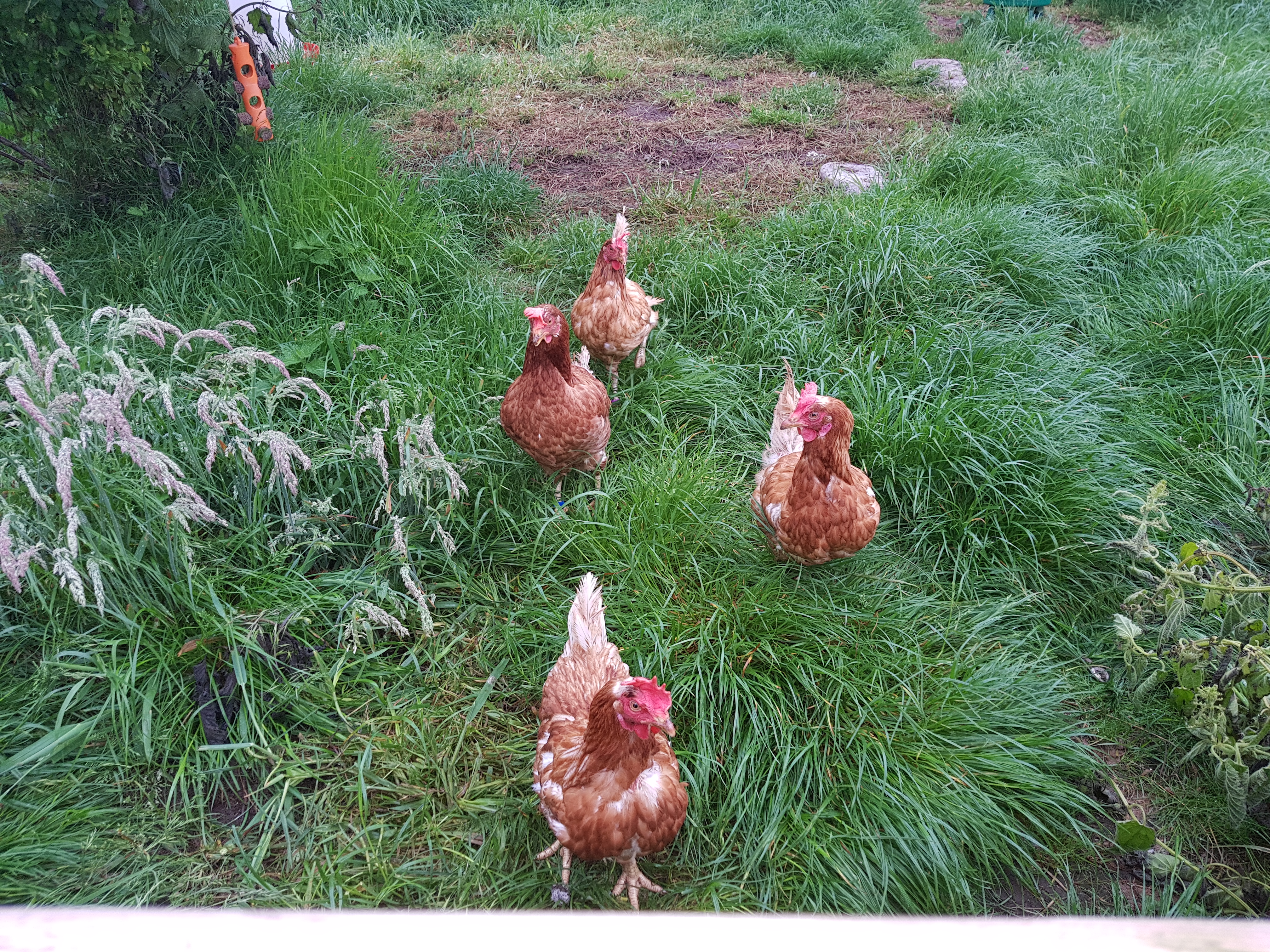 One of the things we did start to find difficult was the time the chickens need shutting in at night. They are most active at dusk and then take themselves off to bed when it goes dark, which soon starting getting later than 9pm, and then past 9.30pm! As Ash and I are early risers we like to get an early night and therefore ordered an electronic door control which lowers the door when it goes dark and opens it when it becomes light in the morning. We’ve checked a few times and there have been no chickens shut out at night so it does a great job.

Zebby got used to the chickens much quicker than we expected. As he has such a strong hunt and chase drive, in particular for birds, I thought it would be hard work, but actually he quickly realised that he can’t get to them and not to bother trying.

I did a little bit of training with him, rewarding him for coming away from the fence and giving him other jobs to do in the garden, but I’ll be honest it didn’t need much work. I saw one of the chickens peck him hard on the nose through the fence one day which I think helped a lot as it really surprised him and he quickly ran away.

Basically they’re a joy to own! They’re so funny to watch and they’re easy to look after, plus provide us with some yummy eggs. I’d like to think they’re happy and have a much more enriching life than in a cage, plus they can live out their old age in comfort now.