As I had a Saturday morning free for once I decided I would go to Parkrun this weekend.

My local one at Cannock Chase wasn’t running due to a canicross competition being there so I decided to go and check out the new one at The Wammy in Newcastle-under-Lyme. Unfortunately travellers had parked up on parts of the course so the organisers decided to cancel it, so I rerouted to Hanley instead.

As I set out on my way I had a sudden panic that I had forgotten my barcode. It was all starting to feel like I shouldn’t make parkrun today! Thankfully I found one stashed in my car (I always try and make sure there is one in there just in case) and I arrived at Hanley drama free. 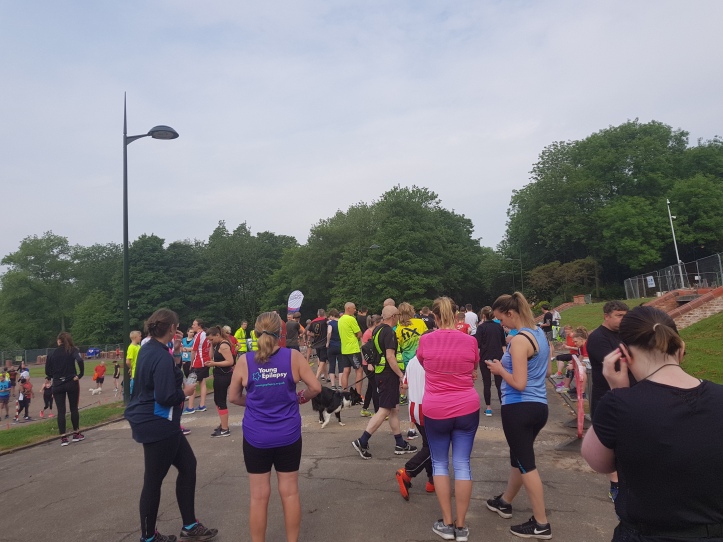 I like to arrive with plenty of time to spare but this does sometimes mean that I’m hanging around feeling a little nervous. I went for a warm up walk and then a short jog as recommended in a recent podcast to get your body in to the swing of running before you cross the line, however that short jog was quite hard. The nerves built, how was I going to find today?!

I spotted some people putting on bibs with big numbers on the back of them, pacers! There were pacers! I’d never been at an event with pacers before. All sorts of thoughts started going through my head, should I run to feel, try and stick with a pacer, if so what time?! Last weeks 37.30 was quite slow for what I’m capable of but I’m well aware that I’m still coming back to fitness after my short rest period. I spotted the 32 minute pacer… my 5k PB with a dog is 31 minutes so I wasn’t sure 32 was within my reach today. 35 minutes… that’s more like it! I am definitely finding that setting off slower and then speeding up towards the end works best for me, so I decided I would try to keep the 35 pacer in my sights but I wouldn’t push myself to stay with him if I just wasn’t feeling it. 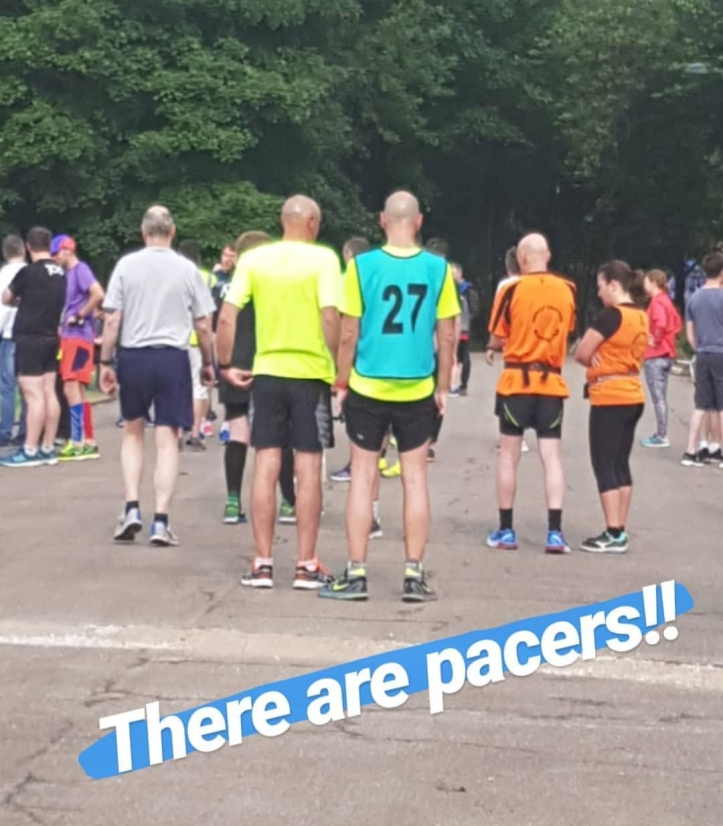 As we set off he went much faster than expected and I started to wonder whether today was going to be a repeat of 37 / 38 minutes. I plodded along, keeping going while a few slowed to a walk around me. A little further ahead was the 35 pacer, still in my sights but out of reach.

I kept at a comfortable pace, thanking each marshal as I passed them partly to test my breathing but mostly to show my genuine appreciation of them giving up their time to volunteer.

At around half way I slowed for a quick walk, maybe 30 seconds at most, then I carried on. I tried to keep going until the end without a walk but Hanley has a few killer hills on the course and with the final hill ahead and then the finish straight I slowed for a very short walk again just to get enough juice back in the tank to manage that last hill to the finish. I tried to find a slow enough jogging pace which would allow me to recover but no matter how slow I go I just don’t find it as comfortably or as effective as a walk. 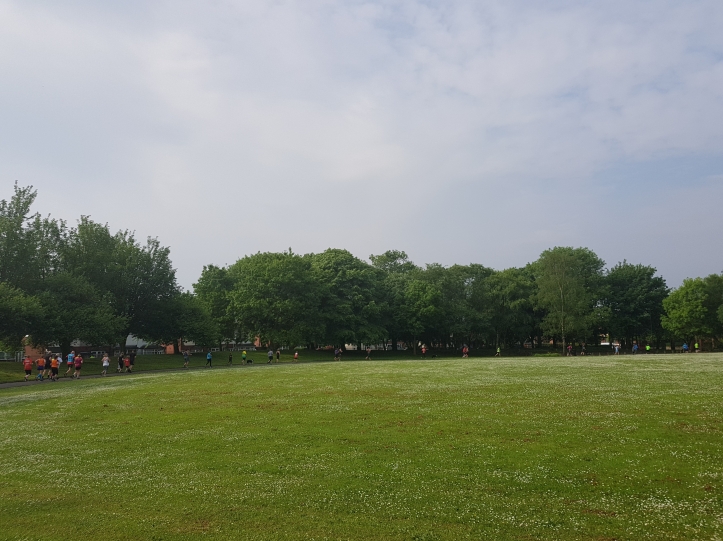 Along the course I heard a few people saying how the 35 pacer was going too fast. I wasn’t sure whether they were right or just saying it to try and make themselves feel better for being behind him, but I tried to ignore them and just kept with my own thoughts and my own feelings. I’d kept the pacer in my sights for the whole way so far and as we got closer to the finish I got closer to him. Somehow I managed to speed up towards the end and as he was right there in front of me I pushed hard and raced past him just before the line! 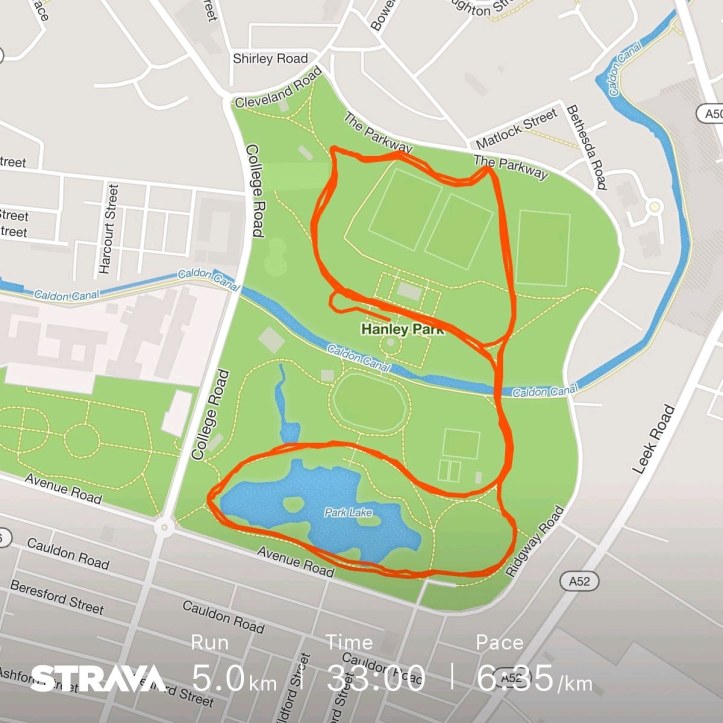 That’s 4 minutes faster than 6 days ago. YES! That’s more like it. I can’t believe the different within 6 days and today I was on form. Back where I used to be. Back feeling great!

As my parkrun email came through with the time it turns out that I had managed a parkrun personal best! I knew 33 was fairly good for me but I didn’t realise I’d never ran that fast at parkrun before, my fastest was 34:52 until then! Blimey. I have managed a 31 minute 5k on my own before but that was with help from Zebby and having a dog pull you always shaves off some time. I’d decided to leave both dogs at home so had run completely under my own steam. 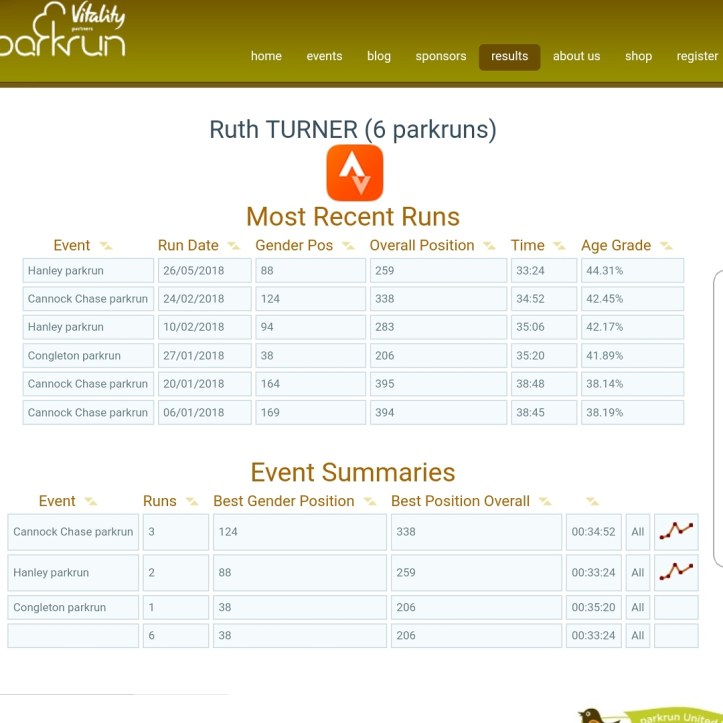 Chasing that pacer certainly had a lot to do with my PB. I had something ahead of me to aim for, something to keep focusing on and trying to reach. As I got closer to him I could hear him chatting with the runners that were sticking close to him, and part of me felt a little left out, but for this run I was happy with my own thoughts. I was happy in my own space with my own mind.

I’m not gonna lie my knees are paying the price but I feel like I will be okay with the correct rest and recovery. Two days off before a very slow, gentle run. The aim of next week is my aerobic capacity not my speed.

I’ve got my mojo back! I can run! I am capable once again. Time to push towards that 10k in August.

I’ve been listening to the parkrun podcast Free Weekly Timed and often feel inspired by how they talk about parkrun as being completely inclusive for all. As I looked around yesterday I really saw that. There were people of all ages, all sizes & all abilities enjoying their run or walk in the park. Some people larger than me were ahead of me, some people older than me were ahead of me, some people younger and much more athletic looking than me were behind me. Running really is for anyone and it doesn’t matter what your capability, you are welcome at a parkrun.