I finally did it!

I finally ran the whole 5k without stopping!

Yesterdays plan was 50 minutes running, but now that my Saturday’s are free again I really fancied doing a parkrun, so I decided to combine the two. I went to The Wammy this time as it’s a flat, out and back course, which I haven’t tried yet. People talk about it being a great course for PBs and I was secretly up for pushing myself to try and run the 5k non-stop, but I was worried in doing so I would compromise my overall 50 minute goal.

I arrived early and ran/walked for 15 minutes before having a break to listen to the new runners briefing and line up to get going. The run/walk was awful, I felt sluggish and tired and was worrying about how the parkrun was going to go, it was also CHUCKING it down and I was regretting wearing shorts. However as we set off I felt okay, they always say running gets easier after the first 20 minutes and it is true, but you just gotta get there first.

I settled in behind two ladies who were at a nice pace and didn’t look like they were going to be stopping any time soon. On we went, forward, forward, forward. Just keep your legs moving. The course is actually quite pretty, along a footpath/cycle path with a lovely canopy overhead providing some shelter from the rain.

One of the problems with a new course is I had no reference points of how far we had gone, but in a way this actually helped and I was determined not to look at my phone or my watch.

After about 15 minutes I was starting to struggle and doubt myself but the people in front weren’t stopping so neither did I, and I told myself that once I reached the turn around point I would be on the home stretch. The fast people started passing the other way which gave me something different to look at and a few were shouting encouragement as they went and high five-ing friends. There was a slight uphill stretch before the turn and then we were heading back and my body relaxed as we ran downhill. I knew I could do it.

I kept looking ahead for any recognisable features that would show how close the finish was and then eventually I saw a clearing. I started to accelerate for the finish but then realised it was still quite a way! Big mistake. I couldn’t hold on to that pace all the way but managed to slow back down to a reasonable jog. Then the actually point I had been aiming for was in front of me, where the path opens up back towards the park, now it was time to speed up! I can do it. I can do it. Keep going. I did it!!!!! 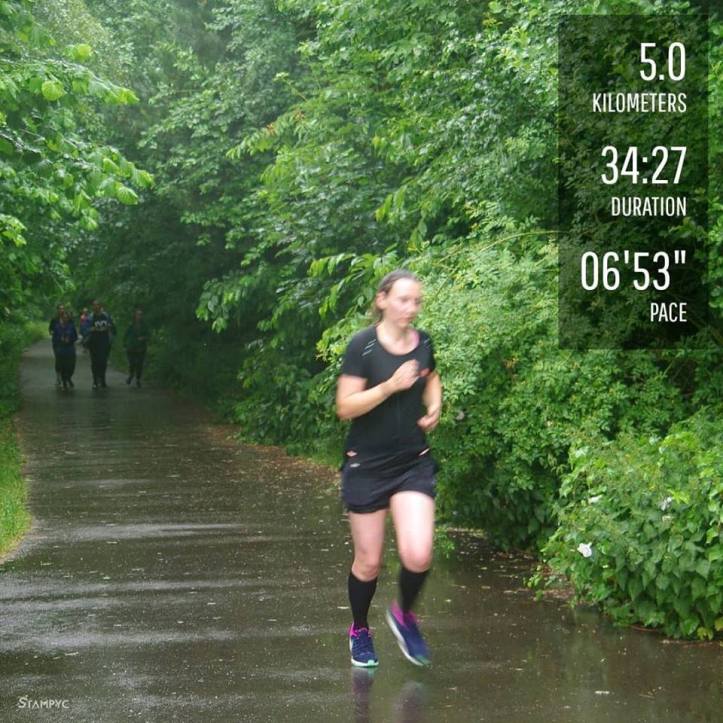 At this point I realised my legs were hurting and there was a little bit of a graze on the inside of my thigh, either where they had been rubbing and chafing together or on my shorts. I’d not an in these shorts before so not sure if the problem was purely the shorts or the rain. I walked like John Wayne back to my car, but was still buzzing from what I had just achieved.

The cog that I have been missing ever since I started running. I just needed to do it, to know that I could do it and therefore do it again! I’m under no illusion that I could go and run a hilly 5k course without walking…. but I might, just might, be able to. Finally I have some measurable progress. 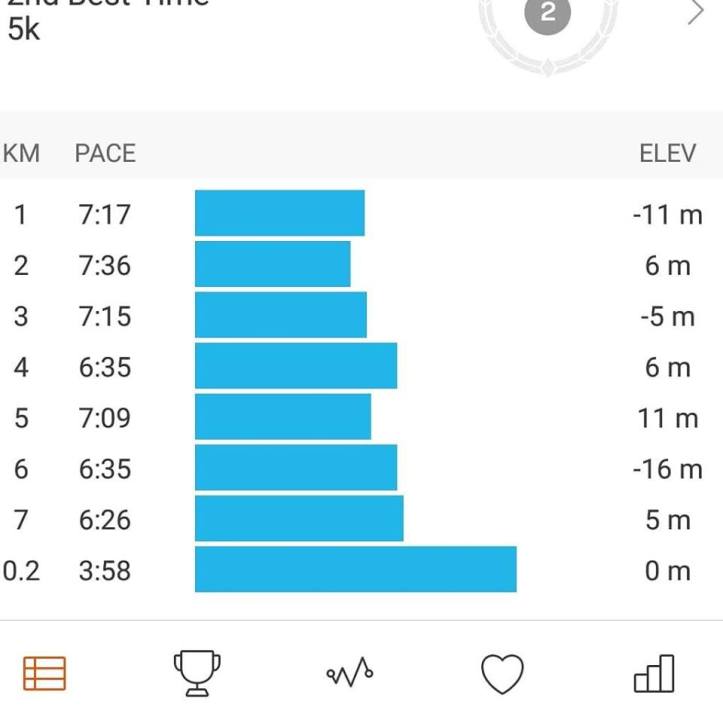 In January I couldn’t run for 5 minutes and I don’t think 5 months is bad going to get to running 5k in 34 minutes non-stop. Especially considering I am RUBBISH at running. It’s not easy for me. It’s taken hard work, plus some set backs with my dodgy knees, but hard work that I am enjoying and committed to.

This is the WORST photograph ever but I guess they can’t all be good… I think my face reflects just how I feel about running 5k, non-stop, in the rain, with chafed thighs! However my smile afterwards was bigger than the grimace.